Specifics of the Bf 109K

The type K was the last version of the Me-109. Indeed, postwar models like the Avia S199 and Spanish Buchon were so different that they are in no way related to the M109 line, with band new engines and tons of modifications. The Bf 109K was multiplication of kits and sub-variants of past F and G series, factory and field conversions which eventually made production and maintenance not only overly complicated but also costly, a real problem for production management Germany ill-afford late in the war. The RLM, under Alber Speer orders, summoned Messerschmitt to rationalise its production and take all improvements to produce a standard model interchangeable parts and equipments, making the production cheaper and faster.

The RLM also pointed out the flaws in the airframe design and ordered these to be fixed for good. This process started in the spring of 1943, the prototype bing ready by autumn. Production started in August 1944, from the K-4 model (only mass production version, until the end of the war), the former pre-series nit equipped yet with the new Mercedes DB 605D engine. Deliveries from October 1944 reached 534 planes by main Messerschmitt A.G. plant at Regensburg (November), 856 in the end of 1944, for a total of 1,593 by the end of March 1945. This was a high rate of production despite allied bombings and continuous fighting. In fact only 314 K-4s were listed on active duty by the end of January 1945. Not all units would receive the Bf 109K.

Modifications of the Bf 109 "Kürfurst"

Externally, there were changes on the fuselage: -Radio equipment hatch, moved forward and higher and D/F loop moved aft of the frames three and four.
-The filler point for the fuselage fuel tank replaced between frames two and three.
-Small circular plate above the footstep deleted
-Rudder fitted with the Flettner tab and fixed tabs.
-Long retractable tail wheel with two small clamshell doors was added.

Also there were changes in the airframe:

Standard speed was 670 km/h (416 mph) at 9,000 m (30,000 ft) with an initial Rate of climb of 850 m/min without MW 50. This engine was mated to a wide-chord, three-bladed 3 m (9.8 ft) wide VDM 9-12159A propeller, the same as the previous G-6/AS, G-14/AS and G-10. Despite its excellent performances however, the 109 K-4 did not fare as well as previous G types which still had the privilege of veteran pilots, a rare occurrence in 1944-45. But the excellent performances of the 19 K did compensated a little for thes inexperienced rookies that were the former Hitler's youth that were trained on gliders and came of age. This was this abundance of novice, pitted against now largely allied veterans that caused such losses, just like for Japan. 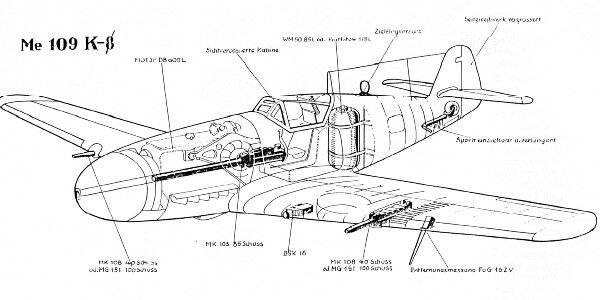