This story should required several volumes as it's thick and amazing in scope and in detail. Long story short, the Soviet Air Force capitalized in its war experiences and mass-production products of WW2 to defined some of its priorities, but integrated Western technologies in both ends of the spectrum to access the next level in the immediate post-war technological race for better planes;

First, the same operation the Americans set in plane in 1945 (Operation Paperclip) occurred in the freed territories by the Red Army: Documents, models, prototypes, everything that was related to German research, and most importantly German scientists and engineers, were smuggled to the East. Spies also were part of rapid Soviet progresses: Famous British spiy Kim Filby passed some valuable informations and the British Rolls-Royce Nene was just shared to the Soviets in the open, at the astonishment of Stalin himself, by the new Labor government. 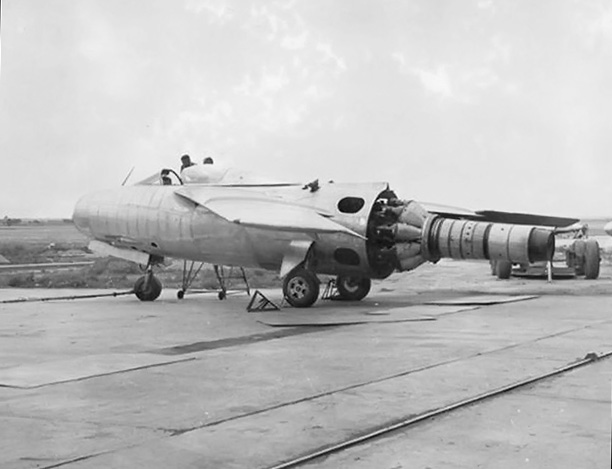 Comprehensively copied they formed the Klimov RD-45 that propelled the MIG-15, the best fighter jet of its era. Bomber-wise, that's a single off-course B-29 in a routine mission over Japan that was intercepted over Soviet territory, forced to land and while the crew was released, the place was not. It was comprehensively reversed-engineered and became later the Tupolev Tu-4 "Bull", the first Soviet long range modern heavy bomber, capable of carrying the Atomic bomb when it became available. Following Soviet bombers owe more to local engineering however, but this prize allowed to take shortcuts.

Back to the origins: The BI story

Soviet aviation already had a peak into jets with the wartime Bereznyak-Isayev BI-1, which first flew in May 1942 and was derived from the unmanned Korolev's RP-318-1 rocket aircraft which flew in 1940. The head of OKB-293, Viktor Fedorovich Bolkhovitinov attended the TsAGI conference on ramjet and rocket propulsion along with two of his top engineers, A. Ya. Bereznyak and A. M. Isaev, which were later tasked to work on a new prototype based on Korolev's engine. This was basically still a rocket aircraft, but with compressed air to force the propellant into the reaction chamber; The invasion of USSR put the program to a new level of emergency, and in this summer, project-G team and Andrey Kostikov the head of RNII sent a letter to Stalin and were answered back to have a prototype in 35 days. "BI" meant Blizhnii Istrebitel (close-range fighter). This small, low-wing monoplane was to be armed with a pair of 20 mm (0.79 in) ShVAK cannon. The skin was plywood bonded with fabric cover, and the chemical propellant tanks were made of high-strength chromium-manganese-silicon steel pressured to 60 bar. The new plane was given test flights in the Urals. There were mild accidents but in January 1943 the BI-2 reached the speed of 675 km/h (364 kn; 419 mph) and the landing gear was switched from wheels to skis. The BI-3 reached an altitude of 4000 m (130000 ft) while the BI-4 was supposed to be the template, armed, for pre-production by Andrey Moskalev's factory. In March there was a new accident, fatal of a BI-1. It was estimated the plane was pushed in the treshold of 800 kph or beyond. 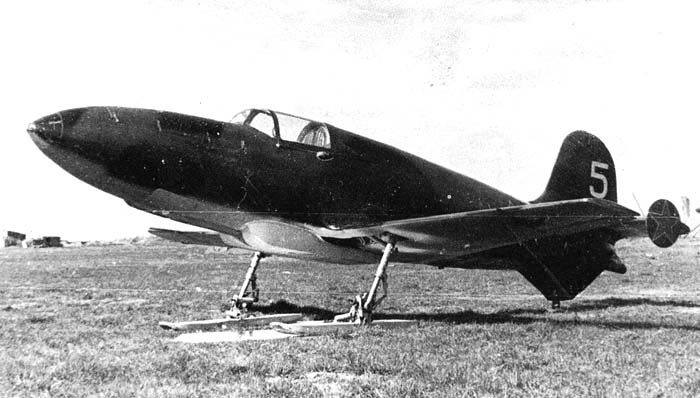 Studies went on by the team, back in Moskow, on the BI-5 and BI-6 in 1944. DM-4 ramjet engines were tested as well as a D-1-A-1100 engine. The BI-7 with the new RD-1 engine January 24 and March 9, 1945. But by that time the way forward was now shown by turbojets that used air, allowing much longer ranges, and the rocket plane program was abandoned. But the experienced team of Bolkhovitinov design bureau became prominent on the development of Soviet space industry and missiles afterwards.

Using jet propulsion was not new for Soviet engineers. In the interwar already, various systems were used to boost some plane's speed, in particular fighters, as a complement to their piston engine. In particular the Polikarpov I-152/153 tested various statoreactors like the DM2 and larger DM-4. These were the only known biplanes to have ever used an auxiliary jet propulsion, an interesting and odd shortcut in technologies. This was only possible because of the extreme sturdiness of these planes, entirely metallic and built "like a tank" -a feature that is still characteristic, in a caricatural way for NATO pilots. Extreme resilience and low technology. In fact jet propulsion went back to the Tsarist Russian mathematician and multi-disciplinary, visionary engineer Konstantin Tsiolkovski, the fundation of GDL lab at Leningrad (first tests of jet prop. by V.P. Glouchko in 1928), and the GIRD (F.A.Tsander) an institute for the development and study of reaction propulsion. Fusion will create the RNII in 1932, allowing the emergence of a new generation of scientists like Korolev and Tikhonravrov, with the blessing of Marshal Toukhatchevski. Financing came in 1933, and new engines were created and tested. This led to an interesting plane, the BiTCh-11, a flying wing that was to be propelled by Tsander's OR-2 rocket, but never flew other than as a glider. It was reminiscent of the Me 163 Komet made by Lippisch and Messerschmitt during ww2. Tsander passed out in 1933 (Typhus) replaced by L. Korneev, but more rockets are tested. In 1933 Korolev and ChtChetinkov created an ambitious two-seat cantilever rocket-propelled monoplane called RP-218, which stayed as a paper project. In the mid-1930s they promoted another project, the Raketonplan 318, a towed rocket plane capable of 1000 kph. However in 1937-38 Stalin's purges severed the team (including Glouchko) and later even Korolev was sent to the Gulag for ten years. Modified, the RP-318 was tested in February 1940. Meanwhile Loulka, assisted by Chtcherbakov and Kozlov created the RD-1, a compressed, eight-stage reaction propeller, but studies were cut short by the great relocation of all factories, bureau and facilities in the Urals. Only in the fall of 1944, as the Me 262 was operational, the TR-1 was tested. But it was produced only from 1947, incorporating technology from reverse-engineered BMW and Jumo engines.